Mirak "Frigate Swarm" tactics - Why and how they work

The Mirak Frigate Swarm is a lesson in brute force alpha strikes where you use one ship to hit the enemy in the head with a rock and use a second or third ship (or volley) to run them over with a truck. The combination is quite effective if used properly.

Quick question - Using bvp 148 as a benchmark, what race and/or ship(s) can do the most potential alpha strike-overrun damage?

Of course, all these damage estimates will end up being lower in actual combat, but you get the idea, a single or group of drone frigates have the potential to do huge amounts of damage very quickly to a enemy ship. I have seen my ships easily do over 100 points damage each in a single pass at the enemy. If he survives, his power is gutted - easy pickings for slow drones.

If you're in GSA, you won't be able to afford the BVP for fast drones. At most you can get medium drones. With that in mind, I prefer to make every hit count which means going with Type VI heavy drones. You get less of them but your punch power is significantly greater. I've tried both and Type VI just work better.

You ok K'tujHegh? Maybe you better lay down. How do I hit anything with tail-tracking, slow drones?

1) Chase me - If the enemy is willing (and often is), you can fire slow drones back at them. If they are close enough (i.e. slow down so they can catch you), they won't be able to turn away until they've taken a full volley. If the enemy isn't close enough or won't close consider doing a HET to overrun or Gorn Anchor them.

2) Circle of death - Some ships (and some people) simply cannot or are unwilling to go faster than spd 16. Simply circle them at close range, pumping in waves of drones. I usually use this after I have gutted their power or if they pop a weasel.

3) Gorn Anchor - Using a DD or DWx, you can get a pretty good anchor going for your drone ships (these ships also fire 4 drones themselves). So the idea is for them to take the lead with a L2 or L3 HOLD tractor and grab the enemy. Their job is to then slow down and hold on while the drone ships fire volleys of drones at a slow enemy. This requires a little practice and good use of the Fleet control panel.

You can also do this with a single drone ship. The Z-DWD is a great late era ship. The DD, DF and MDC will have to be used in early or middle eras. Consider using the DD (bvp 93) even though it isn't a drone cruiser because it can create a L3 tractor at spd 31.

4) Crossing the T - This is an old navel term. Basically it means you get in front of your enemy (looking like you're putting the top on a "T" - or "Crossing the T") at a 90 degree angle. Once you are in front of your enemy and showing a broadside, you fire your missiles so that he runs into them. Distance and his turn rate will determine success.

5) Ramming speed! - The classic overrun. You go at high speed right at the enemy and just before you get to the myopic zone where drones won't fire, you launch (usually about range 1.0). The enemy cannot defend against this (with phasers or ADD or even tractors) and will take anywhere from 50 to 144 points damage very quickly (with a DD and DF, more with 2 DF). 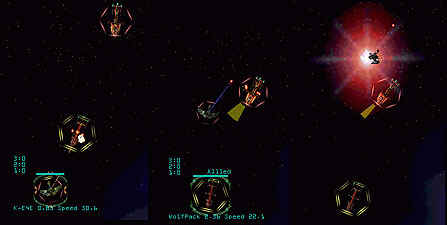 Here is an example of the effectiveness of the overrun. The K-E4E has 4 ADD12 point defense guns but cannot survive a point blank overrun of slow drones. Frame 1: Z-DD fires its missiles and the K-E4E defends for minor damage. Frame 2: Z-DF now fires it's missiles unopposed (for a potential 144 damage!). Frame 3: the result. All ships were moving at or near spd 31.

6) Feint overrun - The most complex maneuver described here is the feint overrun. It requires some practice but can be very rewarding. Head toward the enemy at high speed like you are going to do an overrun. At about range 12-14, start a HET maneuver. Just before you HET (watch the bar), alpha your missiles and HET 180 degrees away from the enemy. This maneuver works particularly well against overrun-type races and they will welcome it right up to the point where you alpha your drones and escape their overrun attack. Works best against Hydran and Lyran.

I apologize but the ESG wasn't at the range you see above. It was at least 1 to 2K away. Film playback bug? Frame 1: Lyran fires up his ESG to smack the Z-DF. I have already started a HET. Frame 2: Z-DF launches missiles just before the HET and has turned around away from the ESG. Frame 3: Z-DF runs out of danger. The ESG has gone down (although the film still shows it up) and the Lyran has taken 8 points damage for 0 in return.

7) Can opener - If a Romulan cloaks against you, they are dead. Set a L2/3 HOLD tractor and head toward them. When you get to range 15, slow to spd 15. As you slowly move toward them, place a t-bomb (use F1!) over the Romulan and run over it. As you flash the mine, your tractor will lock, alpha all missiles! (Use Fleet control if you have multiple ships)

Frame 1: Z-DWD slows at range 15 to spd 15, builds a HOLD tractor, and then t-bombs a mine right on the Romulan. Frame 2: Z-DWD runs over mine, flashes Romulan, and locks onto him. Frame 3: Rotating, the Z-DWD alphas all weapons at the helpless Romulan. Frame 4: The Romulan holds 1 drone, kills 1, and takes 4 x 24 = 96 damage (that's two Plasma Rs), which proves too much for a frigate hull.

Drone Ships To Use

The Mirak Drone Frigate is the first ship you should spend you prestige on no matter when you start your Dynaverse2 career. With 6 Type IV drones, you can easily and quickly kill any AI ships you come up against. With 3 DF in a squadron, you can actually fire 18 drones a turn at the enemy.

The DF turns on a dime and can keep 12 missiles in the air. It's expendables are small, so the AI doesn't waste too much a mission (although it's still frustrating to see the AI drop a slow drone scatterpack at an enemy moving away at spd 31). The power curve on this ship is superb.

This ships is deceptively weak looking. As we see when we look at crunch power and strategies, this ship is a killer of any ship up to (and including some) DN hulls.

Slow, weak point defense, turns like a cow, and only 6 drone control. Use this ship as a last resort to the DF and MDC. In fact, a DD is more useful. I cannot say enough bad things about this lemon.

A major upgrade to the Z-CD, this ship can go spd 31 (although barely), has better point defense, turn rate, and 12 drone control.

For added survivability in later eras, this is a good upgrade to the Z-DF but later you may want to consider:

Better turn rate and acceleration than the MDC, this ship has a much better power curve and decent shielding. Think of it as the DF++. It costs less than the MDC and MDC+.

A good little ship, the DD has enough power for spd 31 and a L3 HOLD tractor if you shut the dizzies off. It makes a nice little ship to take the enemy's first alpha strike and survive for the DFs to make the knock-out blow.

For an anchor ship, there are quite a few choices among this variant. My choices are:

DWE: (BVP 80) Against a drone/fighter race (like the Mirak, Klingon, Hydran, or Federation), this ship makes for a super killer with 1 ADD12 and 4 ADD6. Since it is out in the lead (as your anchor), it chows up fighters and drones for the drone ships to follow.

DWV: (BVP 101) Against a non-drone race (like Lyran, Gorn, Romulan, and ISC), this ship has 2 wings of 2 fighters, point defense, 4 drones with 12 drone control, power to spare, and good shields. This ship has a little bit of everything and makes the ideal mid-sized anchor for a Mirak Frigate Swarm.

Possible combinations for Dynaverse and GSA

If the game is 150, I suggest 2 DF. Anything less and I suggest 1 DF plus whatever other ship you can squeeze in. The Z-POL is only bvp 60 (for an early 134 total). Otherwise, go it alone with the DF or DD. They're both capable ships by themselves in early era matchups.

Work on combinations of these ships. I prefer the DF with medium drones to the MDC with slow drones (the MDC is too slow and unresponsive for finesse drone placement). Having the MDC be the anchor with the DF as the followup works unless your enemy can go spd 31 and keep away from you. So, depending on the enemy, you might consider (again) a DD for anchor.

On the other hand, if I'm up against somebody who I KNOW is using fighters or drones, I want the MDC because it has point defense.

These ships bring their own point defense with them and carry more drones then the early era ships.

Anything under 150, I highly recommend a DWD.

These were human battles and I was using slow Type VI drones.

I recommend viewing from F1... you can see better and that is how I fight my battles.

I also recommend saving films so you can review to see your mistakes. I make several during these battles that I am going to have to work on (like patience when lining up a shot). Although sometimes it looks like I wasted a shot when, in fact, I was trying to get the ship off of my tail.

A quick victory with some assists from my Hydran partner. Definitely shows the quick kill power of a drone ship.

They decided they wanted a second go at 125 late after the quick victory. We added another player to make it a free for all. In the waning seconds of this battle, I fire my last missiles to defeat my final foe for a complete victory.

The Hydran in this battle countered my Gorn Anchor. My solution on a followup pass was to target his tractor beams for H&R (I broke a shield with phasers). After I destroyed his tractors, I anchored him again for his destruction. When H&Ring, I concentrate on tractors for larger ships. On smaller ships, I go after any point defense (or don't bother since most smaller ships have horrible point defense).

Late, 90 FFA battle with me in the Z-DWD

By now, everybody is on to me. For the most part, it's everybody against the Mirak. That pesky H-CRU chases me the whole battle - well, most if it. The battle ends with my ship gutted of power and phasers - but still able to fire drones - for another complete victory.

Notice the punishment the Z-DWD can take and still fire it's missiles. One of the Hydran thought I was out or too heavily damaged - he thought wrong.

Human versus Human, early era D2 battle between my frigate fleet and 2 R-KRC

We can all probably agree that the guy in the 2 R-KRC shouldn't have slowed and cloaked but this film does show good use of overrun, circling, gorn anchor, and can opener tactics.

Used properly, a drone cruiser (or three) is a deadly adversary, capable of dealing enormous amounts of damage very quickly upon an opponent - even with slow drones - in any era.

BACK TO TACTICAL TREATIES